I'm now back in the US after spending a week in Europe with the extended poly network, in which we rented a manor in the English countryside for debauchery and mayhem (an event we called "SquiggleCon 2"), followed by a week in Boston with my crush, who is now my "um, something something relationship," as we're calling it.

Now, a week in the rural English countryside with more than a dozen sex-positive, kinky people might seem invitation to nonstop orgiastic bliss, and you wouldn't necessarily be wrong to think so.

joreth and I took a couple of days off to explore the nearby towns. 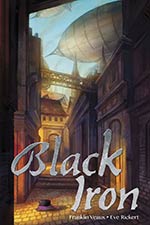 As regular readers may already know, my first professionally published novel, Black Iron, comes out this October. It's a Discworld-style romp through an alternate 19th-century England, one where Queen Victoria doesn't exist, the Protestant Reformation never happened, the Colonies are still Colonies, and the British don't drink tea. It features a princess and a ruffian and an overworked police constable and undead things made of other things.

Inspired by one of the scenes in the book, in which the Lady Alÿs, the aforementioned princess, is attending a formal dance aboard Queen Margaret's airship when she witnesses a strange little man Peter Pan over the edge in the wake of an Unfortunate Discovery,

joreth decided to make a dress modeled after the one the character wore to the dance. And since there's no cosplay like cosplay in an 800-year-old Gothic cathedral built atop a 1,000-year-old Norman church, we packed up, headed into Lincoln, and did an all-day photo shoot in a magnificent cathedral.

Lincoln Cathedral is magnificent indeed. I've been to some amazing houses of worship—I've seen Mass at St. Peter's in Rome and at Notre Dame; I've visited the Church of the Savior on Spilled Blood (Церковь Спаса на Крови) in St. Petersburg, Russia; I've looked out over Reykjavík from atop the peak of Hallgrímskirkja in Iceland; and I've climbed the 409 steps to the top of St. Mary's Church in Gdańsk, Poland—but Lincoln Cathedral may be my favorite. It's immense and beautiful and grand and awe-inspiring, and I spent two days of my seven days in England there.

joreth and I literally spent a solid day running about Lincoln Cathedral, camera in hand, and I think some of the images we got are quite grand. Take a look!